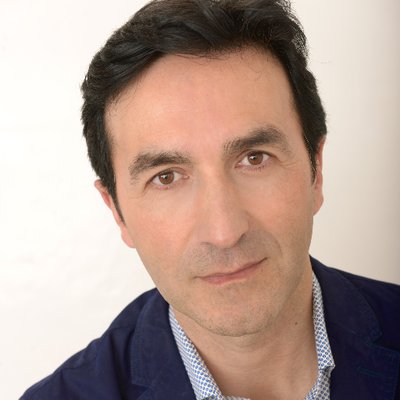 I met poet Mariano Zaro at an artists´ gathering in Los Angeles in 2000.  Immediately, I was drawn to the way he read and the desperation of what his poems expressed.  Since then we have have collaborated on several projects.

This interview took place on December 7, 2005 in Los Angeles, California.

Brandon Mayer: You have talked about your understanding of poetry as wound. Could you elaborate this idea?

Mariano Zaro: For poetry to happen, there must be a wound, one that is self-inflicted by the reader.  And if the reader allows the wound to exist, then the poem will begin to speak.  It is not enough to understand the poem, the reader must know it, and this is an organic knowing.   Poems induce a type of dizziness, an unpleasantness. The reader must stay with this discomfort in order to feel the poem

In regards to the writer, he or she must, like the reader, stay with the doubt and keep the wound open.  The word is like an opening not a solution.

B.M.:Roethke/Brodksy (?) says all poets are exiles. What do you think of this?

M.Z.: On one hand, I believe this is true.  On the other, the poet is an animal of place.  For example, the Spanish poet Vicente Alexandre never left Madrid, even after the Civil War. Emily Dickinson never left Massachusetts. And, returning to the poet as exile, he or she is expelled from reality in a way.  And that expulsion takes the poet to the big outside, separated from reality.  Here the poet is able to see beauty and feel  loss and  pain.

B.M.: So, in a way, there is a delicate balance of being separate and part of life.  This dialogue of involvement and detachment is necessary, otherwise the poems cannot be written.

M.Z.:Yes. And you must work and write to stay grounded.

B.M.: Being a poet from Spain living in California since 1991, how has Los Angeles shaped your work?

M.Z.: Well, it has provided distance which has fueled my memory.  It is as if my youth and memories from Spain assault me.  Foremost, living in LA has enabled me to live in a different language.  Literally, you become someone else in a new language.  And becoming someone else, experiencing a new reality is, at the same time an ecstatic sense of growth and a terrifying sense of loss.

B.M. Yes, because when you become somebody else you say goodbye to the person that you were before. How do you see this in your books?

M.Z.: In my first book Where From (1995), I explore the new language and culture.  My most recent book Poems of Erosion(2003) is about loss.  My current understanding of identity,  deals with development, movement, and doubt.  Transculturally, you don’t understand everything, in the new culture or in your culture of origin.  Therefore you have to be daring, because you can’t understand everything,  it’s impossible.  This creates friction between one’s past and who you want to be.  And loss accompanies this friction, a type of erosion which allows a new shape to form.  Is it difficult? Yes.  Is it worth it? Yes.

B.M.: The Polish-American poet Czeslaw Milosz says that for him poetry is a form of dictation, like listening to his Muse or daimion.

M.Z.: Well, I’m not as extreme as Milosz in the sense that poetry is a strict dictation.  It’s true that the poet must be receptive, empty, open for the poem to happen.  So in a way there is a sense of surrender to what you must write. Because that’s essential, to write what is necessary.  A line can sound clever or beautiful but  is it necessary?  Is that what you have to write?  Writing is a battle. The poem must remain calm within the battle.

Then,  once a poem is completed, often it is a surprise. You don’t really know how the poem got there.

B.M.: As a songwriter, I have a similar sense. After composing a song, often I don’t know how it arrived.

M.Z.: Yes, after writing a poem sometimes I wonder if that will be the last poem I will write, because I don’t know if I will need to write new poems.

B.M.:  I have a question about images.  Often your images are terrifying.  They remind me of the dark images often found in Serbian poets like Popa and Ristovic.

M.Z.:  Recently, I was talking with a friend of mine in Madrid about images.  An image works in poetry when it is able to block a certain pattern of thinking and forces the reader to find another way of processing, another way to find connections between things. A connection that is not evident.

B. M.:  So, is it about mystery, encountering something you don’t truly understand? Einstein said this sense of mystery gives life meaning.

M. Z.:  Ultimately, poetry is the vehicle for the reader to have another kind of experience.  Reading is a type of transformation.  A good image forces you to start this transformation.

(From Poems of Erosion)

Not this ox liver
ripped out
before the altar.
What trembles
written under water.

M. Z.:  This is about writing.  I had a Latin teacher in high school who always selected poets whose writing was not too evident.  I learned how to appreciate the value of suggestion and mystery.  It invites the reader to construct the meaning and become the final author.

B. M.:  There are many images of fire.  Also, there are a lot of windows.  This is also from the most recent book.

White smoke
of mutilated limbs
stillborn children
smoke
of so much cartilage
without name
smoke
assaulting your illuminated
book
drop after drop
blood
stops
somebody dies
a window closes
they turn off the lights.

B. M.: To me this is the poet’s role.  As we discussed earlier, the poet is involved in life and detached, almost hovering, at the same time.

M. Z.:  And philosophically, a window also serves as a frame.  It frames life.  It gives form to chaos.  Something exists when you are able to frame it.

B. M.: Two things, your lines, and overall, the poems are very short and concise.  Why such lyrics coming from such a descriptive oral storyteller?

M. Z.:   In poetry I am obsessed with erasing.  As I said earlier, I want to write what is necessary. The unnecessary really bothers me.  Also, the fact that I wrote both of my books in two languages, it is a good monitor to indicate what is necessary and what is irrelevant.

M. Z.:  This makes sense because mythical thinking was a part of my childhood.  That is the way many aspects of reality were explained to me.

M Z.:  I am writing a collection of short stories, some of which have been published in journals.  They are portraits of women.

B. M.: Why short stories now.  How did this happen?

M. Z.:  It has been very natural.  I used to write short fiction.  I think there is a similarity between the stories and the poems.  The language is similar.  This is what I feel I need to write  now.  These stories are exercises in memory.

B.M.:  Thank you very much for doing the interview this afternoon about your poems and your writing.

Mariano Zaro is a poet and fiction writer. Originally from Spain he moved to California in 1991. He has published two poetry books Desde Donde/Where From (1996) and Poems of Erosion/Poemas de la Erosión (2004). Both in English and Spanish. His poems have been included in anthologies in Mexico, Spain and the US. He also has translated contemporary American poets.  His short fiction has appeared in several literature journals. He has won numerous awards including the 2004 Roanoke Review Prize. He teaches Spanish and Creative Writing at Whittier College.

Brandon Mayer is a musician and composer. He studied film and music at UCLA.  Mayer has lived in Spain, France, and Turkey.  He has released two albums, Sea of Stars (2000) and Palm Tree and Culver (2000).  He has also written music for theater and film, including three films by Turkish director Mahumt Coskun: Ghazal (1999),  The Great Unfinished Experiment (2001), and The Communist (2004).  At present, Mayer is completing a new recording entitled Nothing Without Love. He is a regular contributor to Kirklar.  Mayer lives and works as a teacher in Los Angeles.

“The Musician” (Excerpt) From DECODING SPARROWS

“The Traveler” (Excerpt) From DECODING SPARROWS